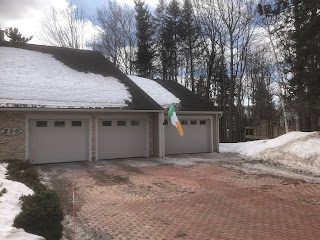 My neighbour decorates his 3-car garage with an Irish flag for St. Patrick's Day.
Do you think he's just lucky to have a place like that?


Luck of the Irish
Happy St. Patrick’s Day.
I hope you enjoy the Luck of the Irish.
Have you ever wondered where an expression like that comes from?
Stereotypes and clichés seem to form around a wee bit of evidence, or at least some observable trends.
So, is it possible that an entire nation is so full of lucky people that they’ve become linked to the idea of luckiness?
I think I can give you some idea of where this notion comes from.  You see, I live directly across the Atlantic from Ireland.
While I can’t see the emerald isle from here, I can see its effects all around me.
In my life, I’ve spend a lot of time in Miramichi and Saint John, New Brunswick.  Both places were big landing spots for the Irish diaspora for well over a hundred years.
In fact, it’s common to hear a young man today in Miramichi refer to his close buddies as ‘the lads.’
That’s pretty Irish, yet nary a leprechaun in sight!
When you walk around Saint John (Canada’s oldest incorporated city) you see block after block of beautiful stone buildings and an amazing city market whose roof is built as an inverted ship hull.
The carpenters of the day were mostly building ships and figured an upside-down hull should work just as well to keep water out.
Then there were railroads and thousands and thousands of acres of cleared land for newly established farms.
And of course, those big Irish Catholic Churches that stretch up, up and up with a million little details that still make people stop and look today.
There is ample evidence that the Irish were ready to be lucky, especially if you subscribe to my definition of luck. (copied from more famous people, of course)
Luck is when preparation meets opportunity.
For millions of Irish, being prepared meant being willing to do a lot of hard work.
And as the evidence demonstrates- Irish people have a lot of experience doing hard work.
Imagine if someone gave you an acreage of forest land and told you that you now had the opportunity to make a farm and home of your own.   Would you know where to start?
They did.
So, what do opportunities look like in 2019 and how can we get prepared to meet them?
Because forest land is rarely being handed out these days.
Opportunity comes at us today in the form of information.
Preparation is done so that we know how to act on the information to our benefit.
Listen to this...
‘I heard that John is headed to Florida, I think he’s looking for a condo to buy because he might retire soon.  I’m not sure what he’s doing with his business.’
‘Did you hear? Norm is in the hospital.  His wife must be going crazy down at the business by herself.’
‘Do you realize that Pedro used to have three crews working for him?  Now he spends a lot of time at the bar.  I don’t think he’s really interested in his business anymore.’
‘I heard that Jennifer is dating a guy out in California.  It seems to be getting serious, but I don’t see how she could move there while taking care of her spa business.’
What would you do if you heard one of these utterances?
Would you have the tools to seize the opportunity?
I can help you get prepared.
Come learn about the training and coaching I can offer you.

Cheers and have a green beer for me.
Dave

PS. The financial forecasting program is now in week #3 and is going strong. Learn more and sign up over here.
Posted by David C Barnett at Sunday, March 17, 2019