[VIEWER QUESTION] How do you know if the asking price on a small business is reasonable?

This week's question is a frequent one. How do we know if an asking price is reasonable?


Hey everyone it's David Barnett from the investlocalbook.com blog site. This week our question of the week comes from Phil who asked how can I determine if the asking price of a business is reasonable or not. And it's a very difficult question for me to answer because there are so many different ways that I can say ‘it depends.’ Or there are certain circumstances that we have to look at. But let me try to address it with some simple sort of guidelines that can help you determine if the asking price is anywhere within some sort of ball park or not.

The first thing you have to determine is what are they selling. Because if you are dealing with an unsophisticated seller or someone who is using an intermediary that doesn't know what they are doing, you could end up looking at something for sale which is not purely a business. This would be what we call a recasting exercise. So for example, is it a business but it also includes real estate. Operating businesses and real estate are two very different types of assets. So somebody could have a business with a free cash flow in your pocket of a $100,000 a year, and they might be asking a million dollars for that business. And on the surface that would seem very unreasonable but if you look under the hood and realize that there is a seven hundred and fifty thousand dollars piece of real estate included in that package, then of course that changes everything. And it could in fact be a reasonable asking price. But you then need to try to determine what's the building’s worth and what's the business is now worth based on the business standing alone.

So you have to do so recasting or normalization and look at that business outside of the real estate with all of the direct cost that it would normally bear if it was operating as a tenant. In general what you want to look for is, I'm I going to be reasonably compensated for the risk that I'm taking in getting into this business. So there are two different measures of cash flow that are often looked at when people are evaluating businesses. And one of them is EBITDA, the earnings before interest taxes depreciation and amortization. In the world of professional business appraisal practice, the EBITDA figure or multiplier is only used when we are talking about businesses within EBITDA of half a million or more. But you find that a lot of the times people will use that type of measure for a much smaller business. And what's interesting about the EBITDA figure is that, it's the cash flow after the professional full-time manager has been paid.


So you need to make sure that, that cash flow figure actually includes a salary for a manager and that the manager is being paid a reasonable market rate. So for example if the owner is paying himself $40,000 but a competent manager in that business should earn 70, then you are going to have to adjust that EBITDA figure. And when you look EBITDAs as a general across the board rule of thumb across all industries which means this is a dangerous thing to look at in a specific instance. But you're generally are going to be between maybe 3 up to 5 times that EBITDA figure, is going to be somewhere in that realm of reasonable.

The other way to look at small businesses is what we call sellers discretionary earnings, which is the EBITDA figure with the owners salary added back. So if the EBITDA was $200,000 and a fair market wage of an owner manager is 70,000, then the sellers discretionary earning will be 270,000. This is the figure that is more often used in evaluating smaller businesses. Because small business buyers tend to look at a business acquisition as a mixture between an investment and buying themselves a job. So that cash flow that goes into their pocket, they look at the whole thing as the return on both their invested capital and their labour together. So when we start looking at sellers discretionary earnings, that multiplier could range anywhere from as low as one times to as high as 3 times, maybe a tad bit more with most industries being around the 2, 2.3 area. But again these are general rules of thumb. If you have a seller's discretionary earnings figure of a hundred grand, and somebody is asking for 500,000 for the business, what it simply says is that a combination of your labour and capital; you are going to take five years to get that back.

And the problem with small businesses is that it's very difficult to say with any degree of certainty what the conditions of the business are going to be in five years; the market, the environment, the economy etc. And so that's why when you are looking at investing your money and your labour, most business buyers want to make sure that they can recoup that investment entirely back to themselves within about two years for example. Now that doesn't mean they are going to pay off the business in two years but it means that they need to get that value back out within that two year period. So I hope that gives you some ideas. It can be really dangerous to apply these rules of thumb in a specific instance. So for example if you went you and you valued a restaurant at the 2.2 times discretionary cash flow, you would actually end up over paying for the restaurant. It's a very competitive industry and people in that industry end up paying far less because of the risks involved.

So I hope that gives you an answer. If you want to really get in and understand how to do this, then I suggest you take my course which is available at businessbuyeravantage.com where we actually work through a step by step example with a sample company. We look at the initial financials, we do normalization. We then do an evaluation of the business and I explain why the multipliers that are put in place in that example are used and how they make sense. So thanks and we'll see you next time.


Hey you made it to the end of the video. That’s great. Don’t forget to visit www.investlocalbook.com and sign up for my e-mail list. Thanks and we’ll see you next time.

The Invest Local Book blog is all about small business, franchises, local investing, home economics, small business systems and borrowing money for your business. It's full of great content and I look forward to seeing your feedback.  Sign up for my mailing list and don't miss a thing! [CLICK NOW] 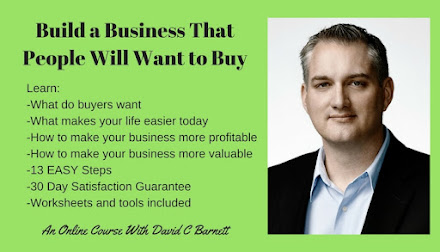